My take on a new College of Teaching

A lot has already been said about the proposed new College of Teaching (CoT). Up until now I have only devoted tweets to the topic, and because it might almost seem as if I’m against such a college, I thought it would be good to write this post. Let’s say I’m positive but politically skeptical. One thing that certainly has become apparent that there is quite some momentum it seems, within the teaching community itself. I even became very enthusiastic about the passionate posts by David Weston and Tom Bennett 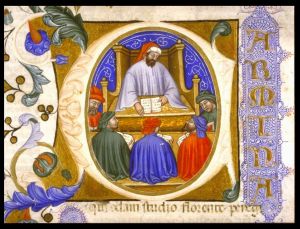 Initial depicting Boethius teaching his students from folio 4r of a manuscript of the Consolation of Philosophy (Italy?, 1385)

(and more at Claim your College). Also, the run-ins I had with Andrew Old were helpful, and showed a drive to make it work. The main discussions center around who could join the CoT and what the CoT would do.

Who could join?
There was some discussion about what teachers were envisaged. Although I initially thought a broad group of teachers should be able to join, after all teaching takes place at many levels, I was convinced by the argument that indeed some sub-groups already have opportunities or can create opportunities themselves. For example, although I have been a secondary school teacher for 14 years, now I’m a teacher/lecturer in HE. Well, the Higher Education Academy is for me then (unfortunately, their funding has been cut considerably), and they provide CPD and certification. So, yes, I can see a good case for a professional body for only schoolteachers, and it could contribute to a stronger professional identity within the sector. It could also certainly play a strong role in CPD and other professional development.

Dangers exaggerated
Mind you,  I think the dangers of allowing a wider group of ‘teachers’ to join have also been exaggerated. I’ve seen words suggesting that outside groups might ‘dominate’ the CoT. I firstly wonder on what evidence this statement is based, as it does fit too easily in a caricature of an educational establishment trying to keep education in a hold.  A caricature which is often ‘proven’, ironically, by providing anecdotal evidence which doesn’t stand the test of reasonable social science research. More importantly, I think that even if this was the case I think the presence of lobby groups will not be any less with or without these groups, just different. I think most organizations eventually will ‘suffer’ from lobby or dominant groups. I don’t think it will be any different in a CoT. Vocal bloggers express their opinion? They might very well be dominant. Some teachers are Google teachers, Apple educators etc. They might very well be overly positive towards technology and be influential. I think any organization gets the audience it deserves.

Teacher Training (Education!) and politics
My main point of political skepticism concerns the function of the CoT. Most people who wrote about it assumed that the CoT would be a ‘professional body’. I, however, am a bit concerned that some groups, especially the government, will see the CoT as something more. In the consultation document by the government the foreword explicitly mentions initial teacher training. Under initial functions in 2.9 it mentions “This might include functions that are presently exercised by the Secretary of State, or other roles undertaken by the Department for Education or the National College for Teaching and Leadership (NCTL) in relation to teacher training and development.”. Especially, the ‘in relation to’ at the end begs the question what functions are meant. The NCTL has the following responsibilities:

Now, if the first two bullets are representative of what the government means with ‘in relation to teacher training and development.’ then to me it’s clear that more stakeholders than ‘schoolteachers’ are involved. Especially the allocation of teacher training places surely is a joint responsibility. I think it would be very undesirable if a new CoT would decide over this unless the brief and membership of it would include all the relevant stakeholders. It would also fly in the face of what Sir Carter mentions in the introduction of the recent Carter review of initial teacher training: “The truth is that partnership is the key.”. The review mentions more critical points for the future, for example in recommending that a future CoT might “develop a framework for core content for ITT”. Again, I would feel it inappropriate if a professional body of only teachers would decide on this when multiple routes into teaching need to be represented.  If anything, the government’s response to the Carter Review seems to agree with a big role in all of this for a new CoT. It is this prospect of perhaps some formal decision powers on Teacher Training which might cause the  CoT to become a political pawn. It is no secret that a school-led teacher training has been the main focus of the government, and this has led to the closure of some university providers. I think a CoT should try to prevent being used as a political pawn and should clearly state that they acknowledge that Teacher Training is a partnership affair which doesn’t mean that a professional body of schoolteachers alone decide on it.

Other comments
The current, most extensive blueprint for the CoT is based on documents from the Prince’s Teaching Institute.
The Teacher Development Trust also has written plans.
Both look pretty extensive and good but don’t really address the point of Teacher Training.
I also think that one critical point will be whether such a CoT would have anything to do with prescribing Standards or not. Maybe more on this in later posts (then again, maybe not).

One comment on “My take on a new College of Teaching”

This entry was posted on January 24, 2015 by cbokhove in Education and tagged college of teaching, education, teacher training.