NPR Math Guy Keith Devlin, from Stanford, recently followed up his promise from his 2011 book “Mathematics Education for a New Era”  and released a free maths game Wuzzit Trouble with his company Innertubegames. Of course, let me start by applauding the fact that someone follows up his theoretical ideas by practicing what he preaches, and releasing something as practical as a game. Naturally, I would have hoped it was released multi-platform, or even better, as a web application, but that could easily be construed as nitpicking. Apparently, there will be an Android version as well. I hope so, because I would be very weary promoting a game that only works on one brand.  After having read some positive reviews I gave the game a shot on the iPad3.

The game follows the structure we know from many apps, like Angry birds: you have levels (75 in total) that require you to solve a puzzle. The better you solve the puzzle, in this case the minimum number of moves, the more stars you earn. The story is about Wuzzits, cute characters that have to be saved. This ‘story’  is not really a story, of course, certainly not the immersive ones we know from blockbuster games like World of Warcraft or Bioshock Infinite. Maybe this isn’t really a fair comparison as these games are on a different level altogether, but that’s what you get as you mention World of Warcraft as a good practice (in the 2011 book).  In this respect I don’t think one of the statements from the 2011 book has been met: it shouldn’t really feel as if you’re doing maths. It is pretty clear that it’s about maths. No problem, I think, because maths and puzzles could be fun, anyway. The levels themselves consist of target numbers that need to be constructed by turning a cog, in the case below with 5. The cog can be turned to the left and to the right. The keys have to be collected by making the numbers by turning the cog. The stars are bonus numbers. 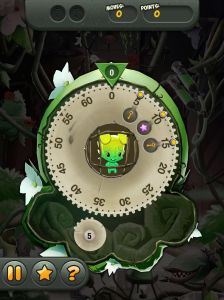 The interface is quite intuitive, and one really only needs a one page help page to get going. This is great, but also the case because the app has a limited scope: integer partitions, if there’s not a lot you can do then you don’t need a lot of instruction. In some cases the lack of maths notation has been applauded. I’m not sure about this; if players see this a maths game -and I think they will- why not introduce or use maths notation as well? I’m thinking of Dragonbox, which uses symbols but later connects them explicitly to maths syntax as well. Based on the number of moves someone needed to

collect all the keys, the game awards you with keys, which means -in the narrative- you have rescued some Wuzzits. I didn’t really see how a lot of children would be motivated to find ‘the partition with least moves’  to win three stars. I think they’d just rather progress. I also wonder how this is different, or more interesting, than just timing exercises.

Frankly, after the positive reviews and an ambitious book, I had expected a bit more from the app; especially the scope could have been wider. At the NCETM conference I tried out Beluga learning (iOS only unfortunately) and found it much more enticing, and also Dragonbox (multiplatform, yay!).Sure, the rationale behind this game seems more grounded in a combination of procedural fluency and conceptual understanding, but at the moment just is too limited. I certainly wouldn’t yet say “Video Games Are The Perfect Way To Teach Math, Says Stanford Mathematician”. Innertubegames describes the game/app as a ‘framework’  that could easily consist of more activities, which will probably be called labs. This shows a lot of potential. I hope the makers can do their ambitions justice. Making good games is a time- and money-intensive exercise. You can have the framework but if there isn’t any money or you need a lot of time, then it would defeat the purpose of framework. As if you’ve made a search engine for five items. This will especially be a challenge if you want to put extra (mathematical) thought in the apps/games. I hope they will succeed in making some more and wish them good luck.

This entry was posted on September 21, 2013 by cbokhove in Math Education, MathEd, Tools.