I recently tweeted about the Open Badges project from Mozilla. I did know some things about the project already, as I knew that Hans de Zwart had already written about it. I, however, had not yet read the white paper. To me, it’s clear what the project is all about. What I miss in the white paper is some sort of assessment of the difficulties and/or risks involved. 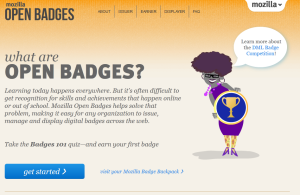 The tweets that started this dialogue were:

(1) @ it’s just that ‘we’ don’t even know how to conform to open standards regarding h/w, why then learning goals?
(2) @ and as any #gamification course will point out: won’t #openbadges become a goal in itself?
(3) @ and then, if everyone starts to use #openbadges, how then will we prevent everyone using them?
(4) @ and if they are ‘controlled’ who will decide on them, and won’t this create a bureaucratic hazard?
@ So that’s why. Any documents addressing these issues?

Point (1) has a lot to do with all those open standards that are failing because of many reasons. Lets take the recent endeavours for ePub3. I’ve been following the stuff that @fakebaldur has written and tweeted about this, and I can almost understand why Apple did their own iBooks. So this begs the question whether, if we already have difficulty in agreeing on technical standards, something more ‘soft’ like learning goals can be used for an open standard that everyone agrees on, let alone the distribution of them.This brings me to (3) and (4), as addressing (1) maybe implies some sort of control over the development. Mozilla has taken up the glove for now, but how are they gonna lead this. Some models, like the certified user one, could maybe help. Mozilla does seem to think about his (of course) as they talk about Threat Models to prevent badge spamming. User consent then comes into play too. Also, endorsements seem to have a function in this (as stated in the white paper). But the problem here is, as stated with (1), that learning goals are less tangible than ‘just being who you say you are’. Openbadges want to say much more, just like Foursquare says more than just whether someone has checked in. In addition, the rewards for having badges on 4sq for example (and I’m not equating them, it’s just to illustrate a further critical point) do not have a large monetary value. Learning goals could have, and this seems to be presented as an unique selling point, a large value. For this reason, I think it will be very worthwhile for people and instances, and I’m not talking about fraud, to issue badges. I’m not sure how someone, with the aim being to collect badges during his/her lifetime, can cope with the thousands of badges that are to appear. At least, when the framework becomes successful (but if it doesn’t then the worth of the framework is diminished). This is a problem with all initiatives that require enough on-boarding to be worthwhile. As we have seen from other open initiatives this is a paradox: just saying it is worthwhile to use doesn’t make it worthwhile per se. Furthermore, the administrative load could be considerable. And who is going to decide who may endorse and who doesn’t. If I have badge programming 101 what does this mean? Do I get one when I did java? Or one for Python as well? Or are there separate ones. Another paradox: to say something you don’t want badges to be too generic, to have badges for every tiny specialism, even issued by different issuers, some endorsed and some not endorsed, would mean an administration that maybe doesn’t work.

When it comes to gamifying (tweet (2)) learning goals (you want to earn badges, and hopefully be motivated to store them) one point to address is whether people collect badges because they are representations of their knowledge and skills (more intrinsic, because he or she wants to), or because collecting them is ‘cool’ in itself. You don’t want the latter, as it will make collecting badges a goal in itself. This ties in by things I’ve also learned in the Gamification MOOC.

In general, I do not see many writings and comments on these risks, and I think there should be. So, to conclude, has this all been thought through? I’m not saying it couldn’t be worthwhile to pursue this, but I do not see many critical reflections towards the feasibility of it all. I think the case for (or against ;-)) open badges could be better if these issues were addressed.

4 comments on “Will Open Badges work?”

This entry was posted on October 4, 2012 by cbokhove in ICT and tagged mozilla, open badges, open standards, risks, twitter.